We have known for some time that the two wives of our Hen Taid, Captain Owen Williams, were related from this sentence on page 261 of Brief Glory written by D. W. Morgan.

"Captain Owen Williams having married first a sister of my mother and then a cousin of hers."

Brief Glory, The Story of a Quest, was written by David William Morgan for his son Gerallt Morgan. It was first published in 1948. The book details life in Aberdyfi and mentions much about our families.

I have often wondered about the actual connection between the two wives; Elizabeth Davies and Jane Roberts. Researching such common surnames has always proved difficult. Now however, with more records being made available, I believe I have discovered the cousin connection.

Turning to Owen's second wife, Jane Roberts, her parents were David Roberts and Eliza Owens. They married in 1845. Eliza Owens was born in 1823, the daughter of the same Thomas and Anne above.

This makes the two wives of Owen first cousins.

Second cousin once removed, Meriel, and her husband Ian gathered a great deal of information on the Williams family by viewing original Towyn Parish register Baptism Records in Dolgellau a while ago. Whilst they were looking for the baptism records for the children of (2x Hen Taid) John Williams and Mary Lewis, they also found a possible marriage between a John William and a Mary Lewis in the Pennal register. This marriage was dated 1 March 1824, but shows John as a widower and Mary as a widow. For a long time this has been the accepted marriage date but it has always bothered me that the first child (Jane) born to John and Mary was four years after their alleged marriage.

Whilst researching this marriage again I found this entry in the FindMyPast Merionethshire Marriages and Banns: 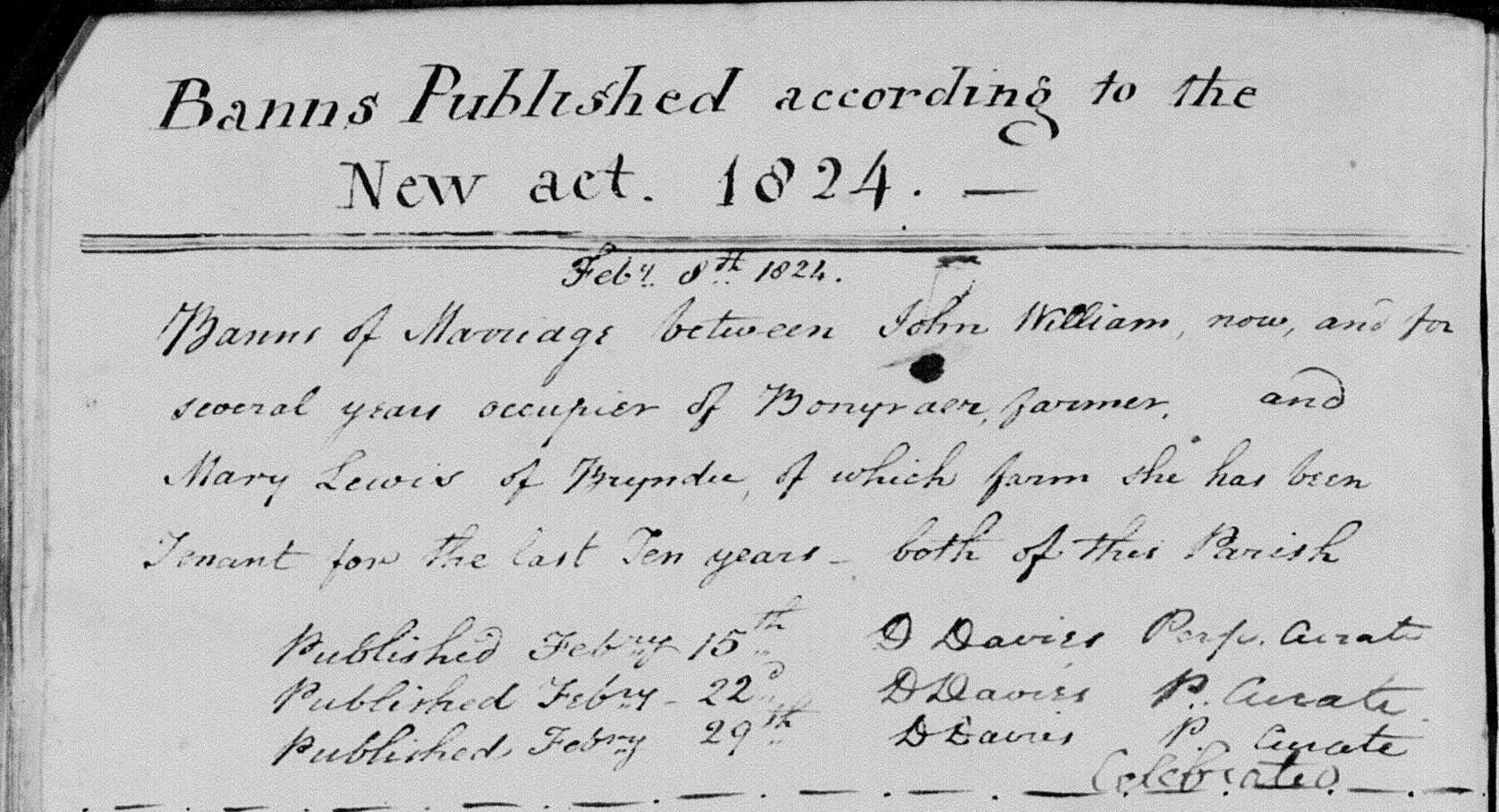 And then, quite by accident, I discovered this Burial Record for a Catherine William:

As you can see, Catherine William (born 1772) was reported as living at Bonyraer at the time of her death in 1822.

My conclusion: The marriage we have assumed to be that of John Williams and Mary Lewis on 1st March 1824 is the wrong one. More research was required!

Since the initial research was carried out a lot has happened in the world of genealogy. Many more records are now available online. Mary Lewis was from Llanbrynmair, Montgomeryshire, so let's search there. It turns out that a John Williams from Towyn, married a Mary Lewis from Llanbryn-mair on 15th May 1827. This is the record we have been looking for.

It is interesting to note that one of the witnesses to the marriage was Athelston Owen, a name well known in Aberdyfi. This Athelston Owen, however, was not the one responsible for donating the Dovey Inn to the village.