Some of the vessels associated with our family

Our great grandfather, Captain Owen Williams, was a share owner and the first Captain of the 76 ton schooner, Catherine. She was built at Llyn Bwtri, near Pennal, on the river Dyfi and registered at Aberystwyth No. 2 in 1869. 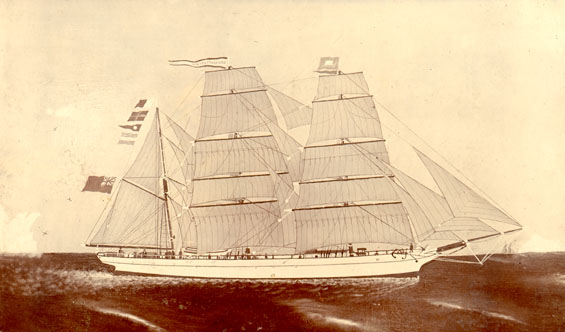 One of Taid’s earliest trips was in the barque Charlotte Young but we have no information as to dates nor destination.

On May 9th, 1910, the Charlotte Young, built in 1867 by Denton, Gray & Co. and owned at the time of her loss by Job Bros. was on voyage from St. John’s, Newfoundland to Pernambuco with fish when she was wrecked 30 miles north of Pernambuco. 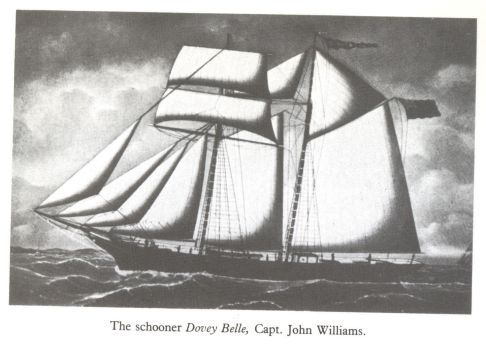 First cousin twice removed, John Williams was captain of ‘Dovey Belle’ built in 1867. The schooner was reportedly lost near Grassholme off Pembrokeshire on July 17th 1909. 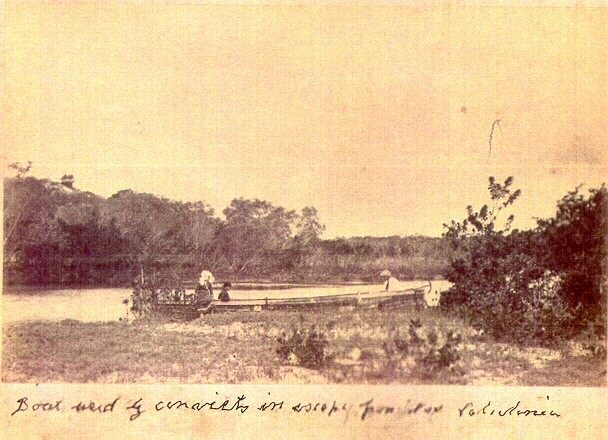 This photograph is probably of the boat James Carden Collins had built. The caption says it is the ‘boat used by convicts to escape from gaol at Caledonia’.

The Gifford was one of the earliest ships that our grandfather John Davies Williams sailed on between 1898 and 1899. He was about 18 during this time. He told his son, Peris Williams, that it was his happiest ship.

The crew of the Gifford numbered twenty-seven men all told. In addition to her captain and three mates she carried sixteen hands forward, four petty officers and three apprentices.

She left Cardiff, Wales, in 1902 with a cargo of coal for Montevideo, South America. Thence she proceeded to Rio Blanco, South America, in ballast, and from that point carried a cargo of wheat to Sydney, Australia. She was then ordered to Newcastle, N. S. W., and left that port on July 12 last for San Francisco with 3500 tons of coal consigned to J. J. Moore & Co. Unfortunately she was caught in thick fog and ran aground on 28th September 1903, and remained stranded close to Mussel Rock near the Golden Gate Bridge until storms and currents demolished her. Fortunately, all her crew were rescued but she was a total loss. During slack tides, divers have salvaged pieces of coal, portholes, and rigging from the Gifford’s scattered remains.

The schooner Jane Owens was built in 1858. Great granduncle Captain Richard Williams served as Master of the schooner from 1866 until he was discharged at Garston (Liverpool) 15/9/1873. He was then about 32.

Great granduncle Ellis Williams was Mate of the Jane Owens in 1866, age 22, though he did re-join the vessel as Boatswain (£4 a month) later in that year and was discharged at London 18/8/1866.

Great granduncle Captain John William Williams, and his son (first cousin once removed) Captain John Williams, were both aboard the vessel Jane Owens in Penzance Cornwall in 1881. John senior was the Master and John junior was an Ordinary Seaman. The rest of the crew were the Mate, David Evans, A B Seaman, Richard Morgan, and the Boy, John Thomas. The entire crew hailed from Aberdovey.

The schooner Maglona was mastered by both our great grandfather, Captain Owen Williams, and Captain David Richards, the son of Captain William Richards.

According to Lewis Lloyd in “A Real Little Seaport”; By May 1876, aged 32, great granduncle Ellis Williams was Mate (£4 10s. a month) of the schooner Maglona. He joined the Maglona at Porthmadog 8/5/1876 and was discharged at Middlesborough 26/6/1876, having served previously aboard the Liffey Maid.

First cousin twice removed John Evans served as an Ordinary Seaman on the schooner Maglona in 1876.

The Maglona was lost at Cape Race, Newfoundland in 1887 whilst seeking a cargo of salt cod. All the crew were saved.

Owen was Master of the Olive Branch for the run from Antwerp to London in February of 1881 and in the home and coasting trade to May 1881. Owen then signed on as Boatswain and Purser for the princely sum of £4 a month under Captain Thomas Walters for a voyage from Limerick to Cadiz and thence to Newfoundland and then homewards by way of Genoa. He was subsequently Boatswain and Purser for voyages to St. John’s, Newfoundland and was finally discharged from the Olive Branch at Port Talbot on 3rd March 1884.

My 3rd cousin, Stuart Williams, sailed a yacht on Lake Ontario in Canada in the 1980s and had named it the Olive Branch after the schooner which Owen Williams had captained. Stuart has now rebuilt a CS 27 sailing boat which is over 40 years old (British design) and here it is at dock taken one Summer.

The Queen of Cambria arrived in Dunedin, Australia on 10 Feb 1883 and is reported to have arrived in Port Chalmers, New Zealand on the same day after sailing from Deal on a 90 day voyage. The ship’s Master at that time was a Captain M. Parry.

Captain Griffith Jones of Nefyn was A.B. aboard the ship between 18 Aug 1888 and 12 Jul 1889. John Davies Williams (Taid) was aboard the Queen of Cambria between 4 Mar 1901 to 11 Jun 1902 while she sailed from Caernarvon to Dunkirk and Australia.

The vessel was wrecked on 26 May 1906, at Lobos de Tierra on passage from Lobos to Antwerp with guano. The Times, Saturday, Dec 29, 1906; pg. 4; Issue 36338; col E Wrecks, Casualties &c. Falmouth, Dec. 27 – Barque Queen of Cambria from Tocopilia (nitrate) entering port in tow, parted cable and fell across bows of Barque Crown of India, from San Francisco, damaging her bead. Queen of Cambria is cut down to water’s edge, and has been beached.

Great granduncle Ellis Williams aged 34 in 1880, appears to have served as A.B. (£3 a month) aboard the schooner Sarah Davies.

First cousin twice removed Captain John Williams was appointed Master of the schooner Sarah Davies (90 tons). His home ashore was then No.35 Copper Hill Street, though in 1891 (Census), aged 26 and single, he was under his parents’ roof at No. 43 Copper Hill Street (a Master Mariner). Subject to a short break in 1899, John Williams remained in command of the Sarah Davies until 1900 (the vessel was transferred to Dublin 30/12/1904).

Taid is mentioned in the book ‘A Real Little Seaport’ by Lewis Lloyd (ISBN 1 874786 48 8) as serving as ‘Boy’ at a rate of £1 a month aboard the schooner Sarah Davies. Some of the information given by Lewis Lloyd is not quite correct as he states that Taid joined the Sarah Davies at the age of 15 when in reality, according to his Discharge Book, he was a mere 13. This was in 1894.

First cousin twice removed Richard Williams was serving as Ordinary Seaman (£1 5s. a month) aboard the schooner Sarah Davies in 1897-8 and was discharged at Porthmadog 25/04/1898.