Austral was a passenger ship built by John Elder & Co., Govan and launched on 21 December 1881 for the Orient Steam Navigation Company, Glasgow. She was used in the passenger route trade to Australia.

She sank at her mooring in Neutral Bay, off Kirribilli Point in Sydney Harbour on 11 November 1882. Five crew were killed in the incident. The ship was raised and sailed to Glasgow for refit.

She was chartered to Anchor Line for 7 months during 1884 for the Liverpool to New York passenger route arriving back at Neutral Bay in 1885.

Christopher Allchin (The Flay Line) emigrated to Sydney, Australia from London on the Austral and arrived in Sydney 22 Feb 1886.

Launched, December 18, 1902. Maiden voyage Liverpool-New York, June 26, 1903. Made her first Liverpool-Boston sailing in 1905. Torpedoed and sunk off Southern Ireland, August 19, 1915, with the loss of 44 lives. Note: Laid down as Minnewaska, but renamed before completion.

Robert Leslie Baldock, related to the Hoggett and Layton families, sailed on the Bendigo from Liverpool on 11th November 1926. He arrived in Fremantle, Western Australia, on the 20th December of that year.

The ship was a twin screw (B Class) steamer built in 1922 at Greenock by Harland and Wolff Ltd.

On 16th January 1924, whilst operating the branch route via the Cape for the Peninsular & Oriental Steam Navigation Co., she collided with the coaster Corcrag in the Thames. In 1929 she was fitted with exhaust turbines and oil fuel. In 1936 the Bendigo was sold to British shipbreakers and broken up at Barrow-in-Furness.

Passengers: 270 first and 210 second. Entered service as the largest mail steamship running between Great Britain and the Colonies. Scrapped in Italy, 1926.

RMS Celtic was an ocean liner owned by the White Star Line. The first ship larger than SS Great Eastern by gross register tonnage (it was also 9 feet (2.7 m) longer), Celtic was the first of a quartet of ships over 20,000 tons, dubbed The Big Four (The Big Four-class ocean liners were a quartet of early-20th-century 20,000-ton ocean liners built by the Harland & Wolff shipyard for the White Star Line, to be the largest and most luxurious ships afloat. The group consisted of Celtic, Cedric, Baltic and Adriatic).

Celtic was launched on 4 April 1901 from the Harland and Wolff shipyards in Belfast, and set off on her maiden voyage from Liverpool to New York City on 26 July.

She and her three sisters proved to be immensely popular with travelers, particularly immigrants. During the infamous 1904 Rate War she set the record for the highest number of passengers carried in a single crossing in White Star’s history. She arrived in New York on 16 September fully booked with 2,957 passengers on board.

The City of New York was an iron steamer with a single screw propellor. She was built for the Inman Line in 1865 and sold on in 1881.

Edwin Colebrook and his family (wife Ann and children Edwin, Alice, Rosa and Herbert) ventured to New York, New York aboard the City of New York in 1873. They arrived on 29th April. Their daughter Frances was born a year later in Ohio. The family are connected via the Wates family.

The picture is of the later City of New York, a twin screw steamer built in 1888.

Mog, aka Maurice William Barry, set sail on the Dunera on his way to Japan.

After the Japanese surrender in 1945, Dunera transported occupation forces to Japan. 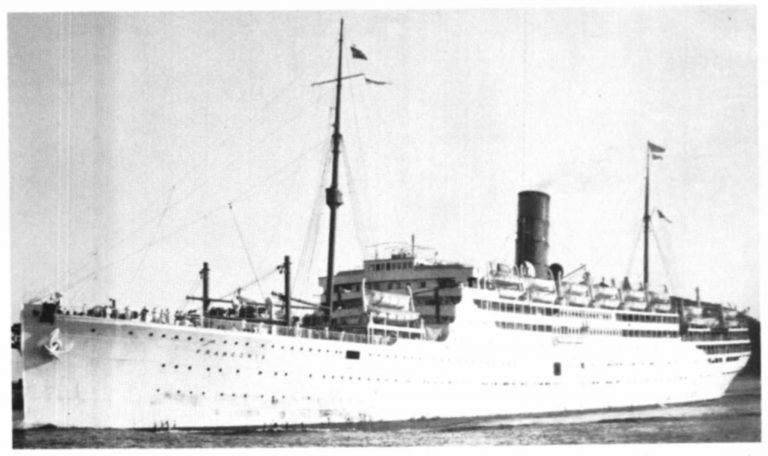 The RMS Franconia was an ocean liner operated by the Cunard Line from 1922 to 1956. She was second of three liners named Franconia which served the Cunard Line, the others being RMS Franconia built in 1910 and the third Franconia in 1963.
She was launched on 21 October 1922 at the John Brown & Co shipyard in Clydebank, Scotland. Her maiden voyage was between Liverpool and New York in June 1923; she was employed on this route in the summer months until World War II. In the winter she was used on world cruises.

On 26 December 1926, Franconia ran aground at San Juan, Puerto Rico and was refloated three days later.

She had a collision in Shanghai harbour in April 1929 with an Italian gunboat and a Japanese cargo steamer.

SS Montrose was a transatlantic ocean liner for Elder, Dempster & Company and the Canadian Pacific Steamship Company. She was the vessel on which Hawley Crippen and his lover, Ethel Le Neve, fled England after Crippen’s wife was murdered.

A 444.3-foot (135.4 m) ocean liner with a 5,440 gross tonnage (GT), Montrose was built by Sir Raylton Dixon & Co. of Middlesbrough and was launched on 17 June 1897 for Elder, Dempster & Company. Making her maiden voyage from Middlesbrough to Quebec and Montreal in September 1897, she began regular service from Avonmouth to Montreal the following month. On 14 March 1900, she began the first of eight voyages from Liverpool to Cape Town as a Boer War troopship.

Rebuilt to 7,094 GT in 1901, she was sold to the Canadian Pacific Steamship Company in 1903, and outfitted for 70 second-class and 1,800 third-class passengers. She began her service between Liverpool and Montreal, Quebec on 20 April 1903. She moved to service from London to Antwerp and Saint John, New Brunswick, in April 1904, and from London to Antwerp, Quebec, and Montreal the following month. Rebuilt again in 1905, the liner was increased to 6,278 GT.

The Viceroy of India was built in 1929 by A. Stephen & Sons Ltd., Linthouse, Glasgow and owned by P. & O. Steam Navigation Co. Ltd., London. My niece’s husband’s grandfather David Hamer Meredith sailed to Egypt on this vessel which was sunk a few weeks later by a U-boat!

The vessel was ordered as steam passenger ship Taj Mahal, completed in March 1929 as Viceroy of India. On 12 Nov 1940, it was requistioned as troop transport by the Ministry of War Transport (MoWT).

At 05.24 hours on 11 Nov 1942 the Viceroy of India (Master Sydney Herbert French) was hit by two of four torpedoes from U-407 34 miles northwest of Oran and was missed by the stern torpedo at 05.31 hours. The ship had arrived at Algiers with convoy KMF-1A, disembarked her troops for Operation Torch and was returning empty to Gibraltar when torpedoed. She was taken in tow by HMS Boadicea (H 65) (LtCdr F.C. Brodrick, RN), but sank in 36°24N/00°35W. Four crew members were killed. The master, 398 crew members, 29 gunners and 22 passengers were picked up by the destroyer and landed at Gibraltar.